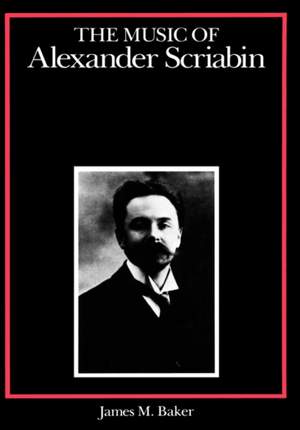 The Music of Alexander Scriabin

Alexander Scriabin was one of a few major composers who revolutionized musical style in the first decade of the twentieth century by eliminating key as a structural principle and by establishing a new use of dissonant harmonies. This book by James M. Baker is a study of Scriabin's twentieth-century music, the first thorough analysis of the composer's evolution from conventional tonality to his later atonal structure. Baker demonstrates that in Scriabin's transitional music, tonal and atonal procedures-generally considered mutually exclusive-work together to create unified compositions. Baker places Scriabin's harmony in the perspective of voice leading, applying Schenkerian techniques of analysis to his music for the first time. He explains the great variety of sonorities and their complex relations within the framework of set-complex theory and introduces an original method of statistical analysis to survey Scriabin's harmonic practice from 1903 to 1914. Offering comprehensive analyses of a considerable number of complete compositions, including such important works as the Fifth Piano Sonata and the Poem of Ecstasy, Baker concludes with a penetrating examination of Prometheus, Scriabin's largest and most complex composition. The literature thus far on Scriabin has emphasized aspects of his often eccentric personality and has focused narrowly on his use of certain characteristic harmonies, especially the famous "mystic chord." This thought-provoking theoretical treatise takes an important step toward a deeper understanding of the composer's accomplishments.