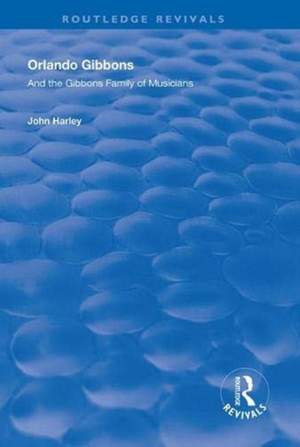 Orlando Gibbons and the Gibbons Family of Musicians

First published in 1999, this volume is the first full-length study to deal with the life and music of Orlando Gibbons since E.H. Fellowes's short book, originally published in 1923. John Harley investigates in detail the family and musical background from which Orlando Gibbons emerged, and gives a fascinating account of the activities of his father, William Gibbons, as a wait in Oxford and Cambridge. He traces, too, the activities of Orlando's brothers - Edward, who was the master of the choristers at King's College, Cambridge and later at Exeter Cathedral; Ferdinando, who may have taken over from his father as head of the Cambridge waits, and who became a wait in Lincoln; and Ellis, who contributed two madrigals to Thomas Morley's collection of 1601, The Triumphs of Oriana. Attention naturally focuses principally on Orlando Gibbons. A full record is given of his remarkably youthful appointment as an organist of the Chapel Royal (he was probably less than twenty at the time) and of his life at court. His additional appointments as one of Prince Charles's musicians and as organist of Westminster Abbey are also described, as is his sudden and premature death in his early forties. Gibbons's music is carefully examined in a series of chapters dealing with his pieces for keyboard and for viols, his songs, his full and verse anthems, and his works for the Anglican liturgy. His development as a composer within these genres is followed, and the character of particular pieces is considered. John Harley concludes that whereas, at one time, Gibbons 'tended to be admired as a successor to Tallis and Byrd, working in a style not essentially different from theirs', it is now 'easier to view him as a pioneer, whose work was cut short by his untimely death'. Orlando Gibbons's son Christopher was only a child when his father died, but he became one of the foremost composers and keyboard players of his generation, writing and performing chamber works and music for the stage during the Commonwealth. Following the Restoration of King Charles II, Christopher Gibbons gained his father's former posts at the Chapel Royal and Westminster Abbey, for which establishments he wrote a number of anthems. His importance is recognized by the inclusion of a long chapter on his life and works.