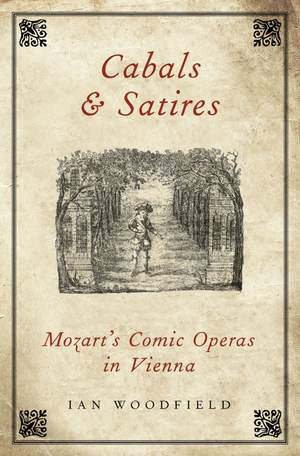 When Joseph II placed his opera buffa troupe in competition with the re-formed Singspiel, he provoked an intense struggle between supporters of the rival national genres, who organized claques to cheer or hiss at performances, and encouraged press correspondents to write slanted notices. It was in this fraught atmosphere that Mozart collaborated with librettist Lorenzo da Ponte on his three mature Italian comedies-Figaro, Don Giovanni, and Cosi fan tutte. In Cabals and Satires: Mozart's Comic Operas in Vienna, Ian Woodfield brings the fascinating dynamics of this inter-troupe contest into focus. He reveals how Mozart, while not immune from the infighting, was able to weather satirical attacks, successfully negotiate the unpredictable twists and turns of theatre politics during the lean years of the Austro-Turkish War, and seal his reputation with a revival of Figaro in 1789 as a Habsburg festive work. Mozart's deft navigation of the turbulent political waters of this period left him well placed to benefit from the revival of the commercial stage in Vienna-the most enduring musical consequence of the war years.