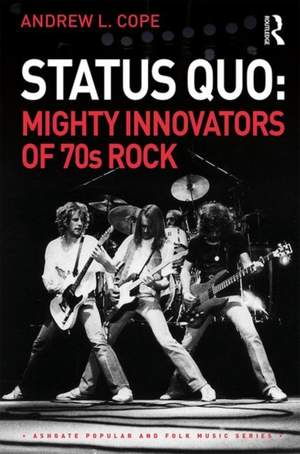 Status Quo were one of the most successful, influential and innovative bands of the 1970s. During the first half of the decade, they wrote, recorded and performed a stream of inventive and highly complex rock compositions, developed 12 bar forms and techniques in new and fascinating ways, and affected important musical and cultural trends. But, despite global success on stage and in the charts, they were maligned by the UK music press, who often referred to them as lamebrained three-chord wonders, and shunned by the superstar Disk Jockeys of the era, who refused to promote their music. As a result, Status Quo remain one of the most misunderstood and underrated bands in the history of popular music. Cope redresses that misconception through a detailed study of the band's music and live performances, related musical and cultural subtopics and interviews with key band members. The band is reinstated as a serious, artistic and creative phenomenon of the 1970s scene and shown to be vital contributors to the evolution of rock.