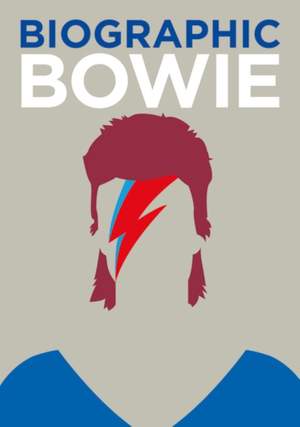 The appealing art and graphics in these short books belie the font of information found within, making the Biographic series a good starting place for reluctant student researchers or curious... — Booklist More…

The Biographic series presents an entirely new way of looking at the lives of the world's greatest thinkers and creatives. It takes the 50 defining facts, dates, thoughts, habits and achievements of each subject, and uses infographics to convey all of them in vivid snapshots. Each Biographic title is designed to be as entertaining as it is informative. Timelines not only pinpoint significant dates, but set them in the context and culture of their times. Dynamic maps locate biographical events alongside other points of interest. Character traits are illuminated by visual comparisons. Many people know that David Bowie (1947 2016) was an iconic singer, songwriter and actor, whose lyrics, performances and ever-changing persona were at the heart of pop culture for over five decades. What, perhaps, they don't know is that he smoked 80 cigarettes a day, acted in 27 films, sold over 140 million albums and once shared a Berlin apartment with Iggy Pop. Biographic: Bowie presents an instant impression of his life, work and fame, with an array of irresistible facts and figures converted into infographics to reveal the artist behind the music.

The appealing art and graphics in these short books belie the font of information found within, making the Biographic series a good starting place for reluctant student researchers or curious browsers