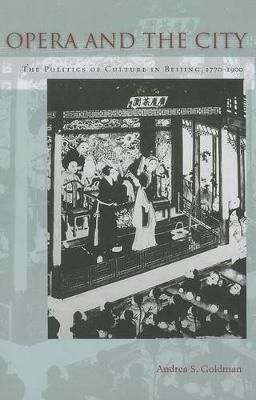 In late imperial China, opera transmitted ideas across the social hierarchy about the self, family, society, and politics. Beijing attracted a diverse array of opera genres and audiences and, by extension, served as a hub for the diffusion of cultural values.

It is in this context that historian Andrea S. Goldman harnesses opera as a lens through which to examine urban cultural history. Her meticulous yet playful account takes up the multiplicity of opera types that proliferated at the time, exploring them as contested sites through which the Qing court and commercial playhouses negotiated influence and control over the social and moral order. Opera performance blurred lines between public and private life, and offered a stage on which to act out gender and class transgressions. This work illuminates how the state and various urban constituencies manipulated opera to their own ends, and sheds light on empire-wide transformations underway at the time.