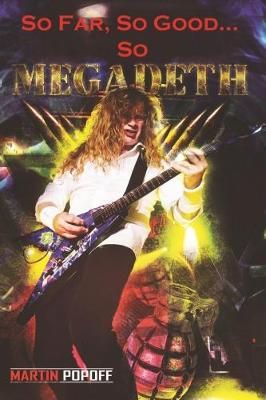 Megadeth's run of thrash classics from the mid eighties through to the nineties continue to be celebrated in the metal community long after leader Dave Mustaine's band mates have been discarded to the sands of time-save one, Dave "Jr" Ellefson. Along the way there's Mustaine's pathology with his ex-friends in Metallica but also a hell of a lot of killer metal as the band works its way up through Peace Sells and So Far, So Good... So What! through to the superlative metal classics, namely Rust In Peace and Countdown To Extinction. Later came Cryptic Writings and Risk that threatened to kill the band but the reconstitution of Megadeth after its demoralising decline and then deflating dispersal at the destructive hand of Mustaine is a story untold... until now. But it's a tale worth telling for its instructiveness on how to rebuild and maintain a career. Quite simply the recent Megadeth story spanning the albums The World Needs A Hero through to Super Collider includes some of the beast and heaviest Megadeth ever committed to record. Celebrate Mustaine's vision track-by-track with top author Martin Popoff. With over sixty books to his name, Popoff applies his tried and tested methodology to a head-crunching canon of work that is truly as strong at the recent end of the spectrum as it is with the classics you all know and love.