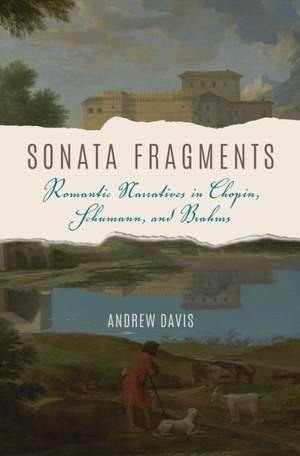 In Sonata Fragments, Andrew Davis argues that the Romantic sonata is firmly rooted, both formally and expressively, in its Classical forebears, using Classical conventions in order to convey a broad constellation of Romantic aesthetic values. This claim runs contrary to conventional theories of the Romantic sonata that place this nineteenth-century musical form squarely outside inherited Classical sonata procedures. Building on Sonata Theory, Davis examines moments of fracture and fragmentation that disrupt the cohesive and linear temporality in piano sonatas by Chopin, Brahms, and Schumann. These disruptions in the sonata form are a narrative technique that signify temporal shifts during which we move from the outer action to the inner thoughts of a musical agent, or we move from the story as it unfolds to a flashback or flash-forward. Through an interpretation of Romantic sonatas as temporally multi-dimensional works in which portions of the music in any given piece can lie inside or outside of what Sonata Theory would define as the sonata-space proper, Davis reads into these ruptures a narrative of expressive features that mark these sonatas as uniquely Romantic.