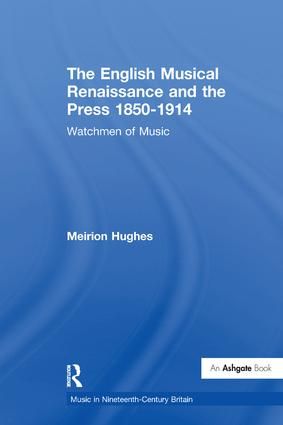 The English Musical Renaissance and the Press 1850-1914: Watchmen of Music

The importance of nineteenth-century writing about culture has long been accepted by scholars, yet so far as music criticism is concerned, Victorian England has been an area of scholarly neglect. This state of affairs is all the more surprising given that the quantity of such criticism in the Victorian and Edwardian press was vast, much of it displaying a richness and diversity of critical perspectives. Through the study of music criticism from several key newspapers and journals (specifically The Times, Daily Telegraph, Athenaeum and The Musical Times), this book examines the reception history of new English music in the period surveyed and assesses its cultural, social and political, importance. Music critics projected and promoted English composers to create a national music of which England could be proud. J A Fuller Maitland, critic on The Times, described music journalists as 'watchmen on the walls of music', and Meirion Hughes extends this metaphor to explore their crucial role in building and safeguarding what came to be known as the English Musical Renaissance. Part One of the book looks at the critics in the context of the publications for which they worked, while Part Two focuses on the relationship between the watchmen-critics and three composers: Arthur Sullivan, Hubert Parry and Edward Elgar. Hughes argues that the English Musical Renaissance was ultimately a success thanks largely to the work of the critics. In so doing, he provides a major re-evaluation of the impact of journalism on British music history.