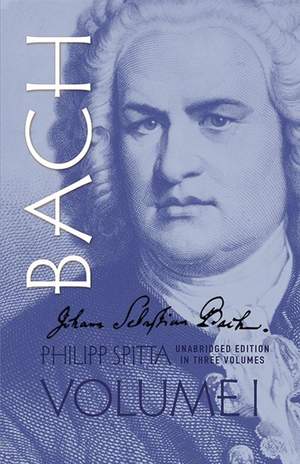 This monumental study of Johann Sebastian Bach ranks among the great classics of musicology. Since its first publication in 1873-80, it has remained the basic work on Bach and the foundation of later research and study. The three-part treatment describes in chronological sequence practically everything that is known of the composer's life: his ancestry, his immediate family, his associations, his employers, and the countless occasions on which his musical genius emerged. Author Philipp Spitta accompanies this biographical material with quotations from primary sources: correspondence, family records, diaries, official documents, and more. In addition to biographical data,Spitta reviews Bach's musical production, with analyses of more than 500 pieces, covering all the important works. More than 450 musical excerpts are included in the main text, and a 43-page musical supplement illustrates longer passages. Despite the scholarly nature of this work, it also has the rare distinction of being a study that can be read with considerable enjoyment and great profit by every serious music lover, with or without a substantial background in the history of music or musical theory.