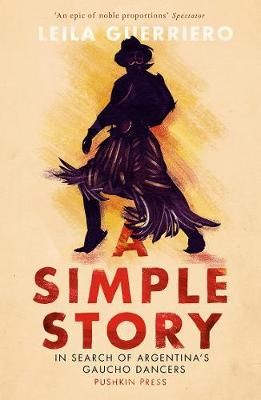 A Simple Story: In Search of Argentina's Gaucho Dancers

'An epic of noble proportions' Spectator A thrilling journey in search of the legendary malambo dance of Argentina, and one Gaucho who faces the biggest contest of his life Every year, at the height of summer, the remote Argentinian village of Laborde holds the prestigious national malambo contest. Little known outside the Argentinian pampas, the malambo is a centuries-old gaucho dance, governed by the most rigid rules and shatteringly physically demanding. It is the object of obsession for thousands of young working-class men, who sacrifice their spare time, their bodies and what little money they have to try to win the title of Malambo Champion. The twist is that a Malambo Champion may never compete again. In 2011, Leila Guerriero travelled to Laborde for what was supposed to be a brief investigation into this intriguing contest. But on the second night, one dancer's towering performance takes her breath away - he doesn't win, but Guerriero, irresistibly drawn, spends the next year following him in his preparations for the 2012 festival. In this remarkable work of reportage Guerriero proves herself to be as sharp-eyed as Gay Talese, as lyrical as Norman Mailer.