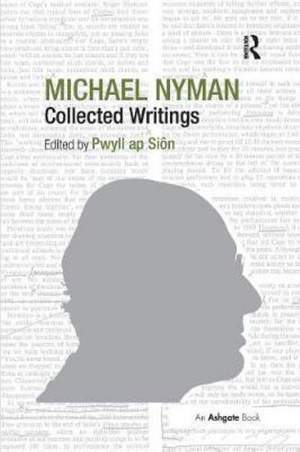 some of the best journalism of the time. One of the most attractive features of this collection of reviews and critical essays from the years between 1968 and 1982 is Nyman's unstuffy appreciation... — Musical Times More…

For over three decades Michael Nyman's music has succeeded in reaching beyond the small community of contemporary music aficionados to a much wider range of listeners. An important element in unlocking the key to Nyman's success lies in his writings about music, which preoccupied him for over a decade from the late 1960s to the early 1980s. During this time Nyman produced over 100 articles, covering almost every conceivable musical style and genre - from the Early Music revival and the West's interest in 'world' music, or from John Cage and minimalism to rock and pop. Nyman initiated a number of landmark moments in the course of late twentieth-century music along the way: he was one of the first to critique the distinction between the European avant-garde and the American experimental movement; he was the first to coin the term 'minimalism' in relation to the music of (then largely unknown) Steve Reich and Terry Riley, and later Philip Glass; the first to seriously engage with the music of the English experimental tradition and the importance of Cornelius Cardew, and to identify the importance of Art Colleges in nurturing and developing a radical alternative to modernism; and one of the first writers to grasp the significance of post-minimalists such as Brian Eno and Harold Budd, and to realize how these elements could be brought together into a new aesthetic vision for his own creative endeavours, which was formulated during the late 1970s and early 80s. Much of what transformed and defined Nyman's musical character may be found within the pages of this volume of his writings, comprehensively edited and annotated for the first time, and including previously unpublished material from Nyman's second interview with Steve Reich in 1976. There is also much here to engage the minds of those who are interested in pre-twentieth century music, from Early and Baroque music (Handel and Purcell in particular) to innovative features in Haydn, spatial elements in Berlioz, or Bruckner and Mahler's symphonic works.

some of the best journalism of the time. One of the most attractive features of this collection of reviews and critical essays from the years between 1968 and 1982 is Nyman's unstuffy appreciation of all that he found authentic - Birtwistle and Maxwell Davies as much as Cardew or Reich. Nyman's writings offer a fresh and fascinating portrait of a musical world whose consequences remain salient today