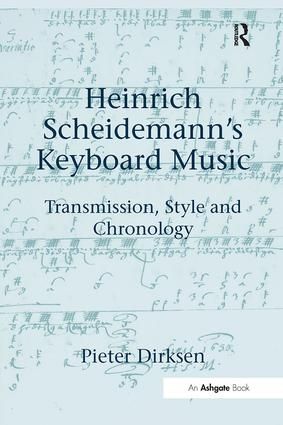 One of the most remarkable tales of recent resurrections in the field of early keyboard music concerns the music of Heinrich Scheidemann (c. 1595-1663). Long considered a minor master overshadowed by such figures as his teacher Jan Pieterszoon Sweelinck or his fellow student Samuel Scheidt, a number of major source discoveries made in the second half of the twentieth century - the most important one being the discovery of the Zellerfield tablatures - have gradually raised his stature towards what it should now be, namely that of the paramount figure in North German organ music of the first half of the seventeenth century, equalled only by Buxtehude in the second half. Pieter Dirksen, one of the leading scholars on early German keyboard music, shows how Scheidemann was a central personality in the rich musical life of Hamburg and stood on friendly terms with colleagues such as Jacob and Johannes Praetorius, Ulrich Cernitz, Thomas Selle, Johann Schop and Johann Rist. The sources for Scheidemann are for the most part contemporary and stem from all periods of his career, and beyond that until one or two decades after his death. His keyboard music was never published in his lifetime but circulated widely within professional circles. Dirksen considers the transmission of Scheidemann's music as a whole in Part One, where each source is analyzed individually, and the repertoire itself is examined in Part Two. A number of specialized studies, including a detailed investigation into the background of one of the sources as well as adressing questions of organology (an account of the famous Catharinen organ as it was during Scheidemann's era) and performance practice (a study of the fingering indications and observations on registration practice) form Part Three. A wealth of appendices also detail a relative chronology of the music; a geographic overview of the transmission and two hitherto unpublished, fragmentarily transmitted Scheidemann pieces. The book will therefore a