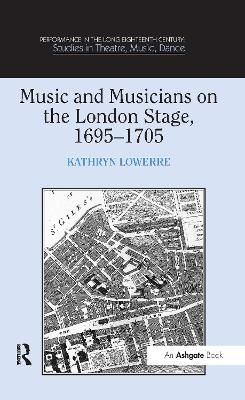 Lowerre is a musicologist, but she draws seriously and competently on the relevant scholarship and reference books in theatre history... Lowerre has added usefully to our grasp of musical practice... — Music and Letters More…

From 1695 to 1705, rival London theater companies based at Drury Lane and Lincoln's Inn Fields each mounted more than a hundred new productions while reviving stock plays by authors such as Shakespeare and Dryden. All included music. Kathryn Lowerre charts the interactions of the two companies from a musical perspective, emphasizing each company's new productions and their respective musical assets, including performers, composers, and musical materials. Lowerre also provides rich analysis of the relationship of music to genres including comedy, dramatick opera, and musical tragedy, and explores the migration of music from theater to theater, performer to performer, and from stage to street and back again. As Lowerre persuasively demonstrates, during this period, all theater was musical theater.

Lowerre is a musicologist, but she draws seriously and competently on the relevant scholarship and reference books in theatre history... Lowerre has added usefully to our grasp of musical practice in the turn-of-the-century period

Lowerre's considerable understanding of the repertoire and contemporary events allows her to place the works in their historical context, highlighting social commentaries and intertextual references that occur between pieces and filling in gaps in our knowledge of works and performers through logical deduction where relevant