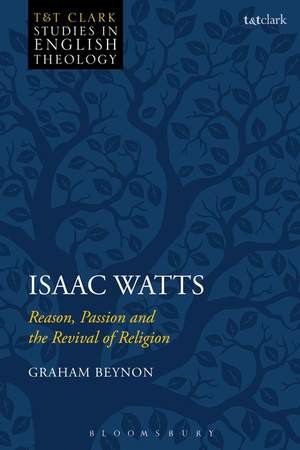 Isaac Watts: Reason, Passion and the Revival of Religion

Isaac Watts was an important but relatively unexamined figure and this volume offers a description of his theology, specifically identifying his position on reason and passion as foundational. The book shows how Watts modified a Puritan inherence on both topics in the light of the thought of his day. In particular there is an examination of how he both took on board and reacted against aspects of Enlightenment and sentimentalist thought. Watts' position on these foundational issued of reason and passion are then shown to lie behind his more practical works to revive the church. Graham Beynon examines the motivation for Watts' work in writing hymns, and the way in which he wrote them; and discusses his preaching and prayer. In each of these practical topics Watts's position is compared to earlier Puritans to show the difference his thinking on reason and passion makes in practice. Isaac Watts is shown to have a coherent position on the foundational issues of reason and passion which drove his view of revival of religion.