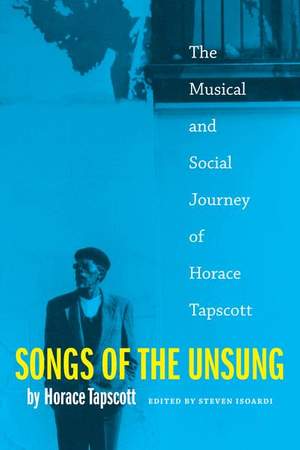 Songs of the Unsung: The Musical and Social Journey of Horace Tapscott

Songs of the Unsung is one of those special autobiographical narratives that comes along once in a while, and successfully captivates its reading audience with the complete candor of the person... — Jazz Review More…

Despite his importance and influence, jazz musician, educator, and community leader Horace Tapscott remains relatively unknown to most Americans. In Songs of the Unsung Tapscott shares his life story, recalling his childhood in Houston, moving with his family to Los Angeles in 1943, learning music, and his early professional career. He describes forming the Pan Afrikan Peoples Arkestra in 1961 and later the Union of God's Musicians and Artists Ascension to preserve African American music and serve the community. Tapscott also recounts his interactions with the Black Panthers and law enforcement, the Watts riots, his work in Hollywood movie studios, and stories about his famous musician-activist friends. Songs of the Unsung is the captivating story of one of America's most unassuming heroes as well as the story of L.A.'s cultural and political evolution over the last half of the twentieth century.

Songs of the Unsung is one of those special autobiographical narratives that comes along once in a while, and successfully captivates its reading audience with the complete candor of the person telling the story! This is an important sociological document, for it tells the life of Horace Tapscott, one of the most unique figures in the jazz of Black Los Angeles. . . . What is most unique about Songs of the Unsung is that it reveals a man who not only lived jazz, but contributed to it in meaningful ways, and was a walking masterpiece of the personal philosophy he advocated. He lived to teach, help others, perform, create. Horace Tapscott succeeded at each. Songs of the Unsung lets the reader see how he did it. Songs of the Unsung is excellent reading. This book entertains and enlightens at the same time, and is a fine reading experience!" -- Lee Prosser

Isoardi has done a fine job of preserving Tapscott's voice-the narrative is fluent, conversational in tone and packed with both colourful incident and tart social commentary. . . . [A]s a gripping account of a quietly heroic life, and as a rare document about the West Coast's black cultural underground, Songs of the Unsung is essential reading." -- Graham Lock