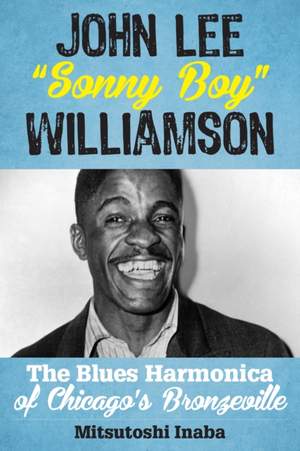 This one, originally started as a collaboration with Jim O'Neal, is a very easy read indeed. It flows beautifully and sweeps the reader along effortlessly....The bibliography is impressively... — Blues & Rhythm More…

John Lee "Sonny Boy" Williamson was one of the most popular blues harmonica players and singers from the late 1930s through the 1940s. Recording for the Bluebird Records and RCA Victor labels, Sonny Boy shaped Chicago's music scene with an innovative style that gave structure and speed to blues harmonica performance. His recording in 1937 of "Good Morning, School Girl," followed by others made him a hit with Southern black audiences who had migrated north. Unfortunately, his popularity and recording career ended on June 1, 1948, when he was robbed and murdered in Chicago, Illinois. In 1980, he was inducted into the Blues Foundation Hall of Fame. Mitsutoshi Inaba offers the first full-length biography of this key figure in the evolution of the Chicago blues. Taking readers through Sonny Boy's career, Inaba illustrates how Sonny Boy lived through the lineage of blues harmonica performance, drawing on established traditions and setting out a blueprint for the growing electric blues scene. Interviews with Sonny Boy's family members and his last harmonica student provide new insights into the character of the man as well as the techniques of the musician. John Lee "Sonny Boy" Williamson: The Blues Harmonica of Chicago's Bronzeville provides fans and musicians alike an invaluable exploration of the life and legacy of one the Chicago blues' founding figures.

This one, originally started as a collaboration with Jim O'Neal, is a very easy read indeed. It flows beautifully and sweeps the reader along effortlessly....The bibliography is impressively thorough. Heartily recommended