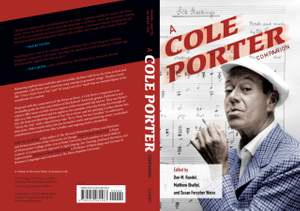 Balancing sophisticated melodies and irresistible rhythms with lyrics by turns cynical and passionate, Cole Porter sent American song soaring on gossamer wings. Timeless works like "I Get a Kick Out of You" and "At Long Last Love" made him an essential figure in the soundtrack of a century and earned him adoration from generations of music lovers. In A Cole Porter Companion, a parade of performers and scholars offers essays on little-known aspects of the master tunesmith's life and art. Here are Porter's days as a Yale wunderkind and his nights as the exemplar of louche living; the triumph of Kiss Me Kate and shocking failure of You Never Know; and his spinning rhythmic genius and a turkey dinner into "You're the Top" while cultural and economic forces take "Ev'ry Time We Say Goodbye" in unforeseen directions. Other entries explore notes on ongoing Porter scholarship and delve into his formative works, performing career, and long-overlooked contributions to media as varied as film and ballet.Prepared with the cooperation of the Porter archives, A Cole Porter Companion is an invaluable guide for the fans and scholars of this beloved American genius.