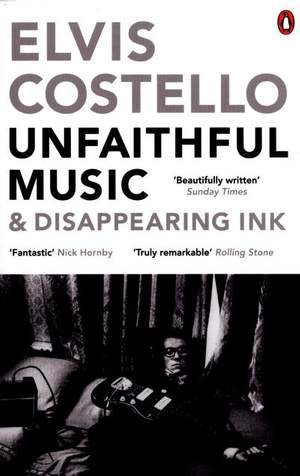 Remarkable for its breadth and candour about everything: childhood, family, marriages, musical collaborations, love life, heroes, villains, screw-ups (even the most painful) and his songs...there... — MOJO More…

Unfaithful Music and Disappearing Ink is the long-awaited memoir from Elvis Costello, one of rock and roll's most iconic stars.

Born Declan Patrick MacManus, Elvis Costello was raised in London and Liverpool, grandson of a trumpet player on the White Star Line and son of a jazz musician who became a successful radio dance band vocalist. Costello went into the family business and had taken the popular music world by storm before he was twenty-four.

Costello continues to add to one of the most intriguing and extensive songbooks of the day. His performances have taken him from a cardboard guitar in his front room to fronting a rock and roll band on your television screen and performing in the world's greatest concert halls in a wild variety of company. Unfaithful Music describes how Costello's career has somehow endured for almost four decades through a combination of dumb luck and animal cunning, even managing the occasional absurd episode of pop stardom.

This memoir, written with the same inimitable touch as his lyrics, and including dozens of images from his personal archive, offers his unique view of his unlikely and sometimes comical rise to international success, with diversions through the previously undocumented emotional foundations of some of his best known songs and the hits of tomorrow. The book contains many stories and observations about his renowned co-writers and co-conspirators, though Costello also pauses along the way for considerations on the less appealing side of infamy.

Unfaithful Music & Disappearing Ink is destined to be a classic, idiosyncratic memoir of a singular man.

Remarkable for its breadth and candour about everything: childhood, family, marriages, musical collaborations, love life, heroes, villains, screw-ups (even the most painful) and his songs...there are treasurable moments in profusion for admirers panning for gold...or diving for pearls