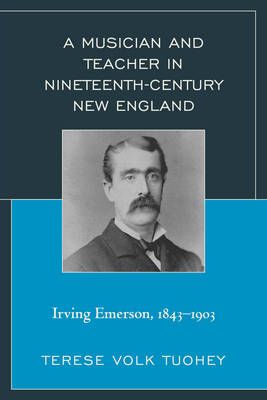 Tuohey has given us an exceptional work, particularly useful to those trying to better understand the music and instruction of the late nineteenth century. The author firmly tied Emerson into... — Journal of Historical Research in Music Education More…

There is a need for historical studies in music education that focuses on the common person. Historians in general have been doing this for years, but music education history has yet to catch up to the field. Although there have been many biographies and biographical studies about the more well-known music educators, little has been done investigating what teaching was like for the average teacher, and even less is known about teaching music in the early years of music education in the United States. A Musician and Teacher in Nineteenth Century New England: Irving Emerson, 1843-1903 argues that understanding history requires knowledge of the people who lived during the time. This book focuses on what Irving Emerson's life was like as a musician and music teacher during this early and critical period of music education. During this time in history, the growth of music as a curricular study in the United States, from singing schools to classroom singing and note-reading, paralleled Emerson's teaching career. It was because of the groundwork established by music teachers like Irving Emerson that the music curriculum developed in the twentieth century to include music appreciation, instrumental music ensembles and marching band, along with general music classes and choral music education. This is an invaluable resource to music educators, musicians, and historians alike in understanding the beginnings and formation of what is today music appreciation in the education system.

Tuohey has given us an exceptional work, particularly useful to those trying to better understand the music and instruction of the late nineteenth century. The author firmly tied Emerson into the late nineteenth-century New England performing and teaching ethos, filling an important gap in the activities, the economy of music performance and teaching of the period. The book stands as a model of organization and documentation. Considering the copious interpretation and excellent writing, Tuohey's Emerson is important work and should be of deep interest to music education researchers, musicologists, and historians of New England culture