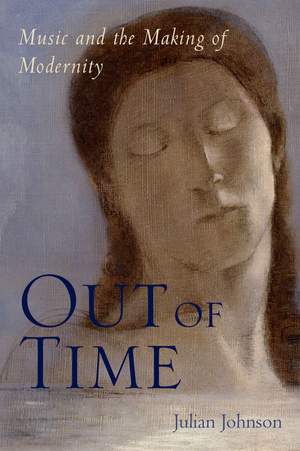 Out of Time: Music and the Making of Modernity

Including many musical examples and a wealth of references to literature on modernity and music, this refreshing exploration of "modern music" goes backward and forward, and surrounds music in... — Choice More…

What does music have to say about modernity? How can this apparently unworldly art tell us anything about modern life? In Out of Time, author Julian Johnson begins from the idea that it can, arguing that music renders an account of modernity from the inside, a history not of events but of sensibility, an archaeology of experience. If music is better understood from this broad perspective, our idea of modernity itself is also enriched by the specific insights of music. The result is a rehearing of modernity and a rethinking of music - an account that challenges ideas of linear progress and reconsiders the common concerns of music, old and new. If all music since 1600 is modern music, the similarities between Monteverdi and Schoenberg, Bach and Stravinsky, or Beethoven and Boulez, become far more significant than their obvious differences. Johnson elaborates this idea in relation to three related areas of experience - temporality, history and memory; space, place and technology; language, the body, and sound. Criss-crossing four centuries of Western culture, he moves between close readings of diverse musical examples (from the madrigal to electronic music) and drawing on the history of science and technology, literature, art, philosophy, and geography. Against the grain of chronology and the usual divisions of music history, Johnson proposes profound connections between musical works from quite different times and places. The multiple lines of the resulting map, similar to those of the London Underground, produce a bewildering network of plural connections, joining Stockhausen to Galileo, music printing to sound recording, the industrial revolution to motivic development, steam trains to waltzes. A significant and groundbreaking work, Out of Time is essential reading for anyone interested in the history of music and modernity.

Including many musical examples and a wealth of references to literature on modernity and music, this refreshing exploration of "modern music" goes backward and forward, and surrounds music in the present