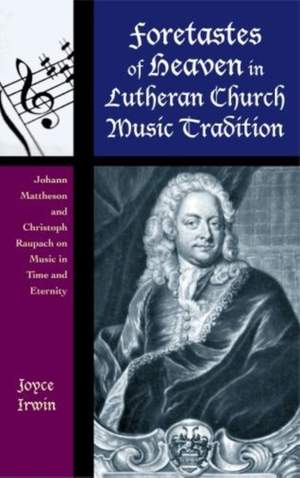 Foretastes of Heaven in Lutheran Church Music Tradition: Johann Mattheson and Christoph Raupach on Music in Time and Eternity

In the two centuries after Martin Luther's affirmation that music stood second only to theology, Lutheran theologians and musicians formulated a theological defense of music that validated this exalted status. Against Calvinist rivals and Pietist critics, the orthodox Lutheran position further claimed that both instrumental and vocal music were commanded by God. Joyce Irwin's earlier work, Neither Voice nor Heart Alone: German Lutheran Theology of Music in the Age of the Baroque, traced this development in Lutheran theological thought. In this current work, Foretastes of Heavenly Music: Johann Mattheson and Christoph Raupach on Music in Time and Eternity, Irwin provides translations and commentary for two eighteenth-century texts that illuminate the musico-theological foundation underlying the work of Lutheran composers such as Bach and Telemann. A Truth Lover's Clear Reasonings on Which the Correct Use of Music Rests (1717) by Christoph Raupach, with an introduction by Johann Mattheson, serves as a cumulative statement of Lutheran advocacy of music. Mattheson's Affirmation of Heavenly Music (1747) goes a step further in defending the reality of music in heaven and even the ultimate superiority of music over theology and sermons. Irwin's introduction traces the centrality of Mattheson's belief in heavenly music throughout the course of his life, even while he was writing works of music theory that earned him a reputation as an Enlightenment thinker. Though influenced by Enlightenment philosophy, specifically British empiricism, he rejected the rationalist philosophies of his German contemporaries and expressed no sympathy for the emerging school of biblical criticism. This work is ideal for music historians, Bach scholars, theologians, and researchers in the field of sacred music.