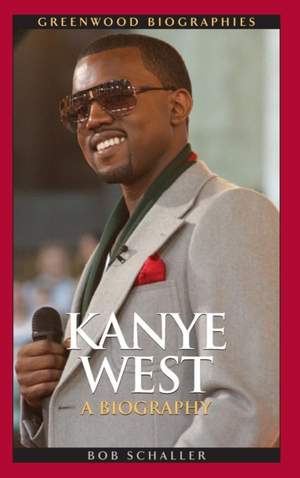 A revealing biography of Kanye West explores the artist-and the man.

Kanye West is a star. His music has jumped from sensation to staple in the rap industry, while his personality, his philosophies, and his willingness to speak out for what he believes in regularly place him at the center of controversy. Kanye West: A Biography traces the star's life from his birth through the present day to paint a detailed picture of the artist and the man.

Raised by a single mother who was an English professor in Chicago, West admits he came from "the wrong side of the mall" rather than the wrong side of the tracks. His name, his style, and the way he conducts his business are unique. His thoughtful reflections in interviews reveal a complex man few have taken the time to understand. This biography looks at that multifaceted star, exploring his career as singer and producer, but also looking at the forces that prepared him to chase his dreams-and chase off anyone who stood in his way.