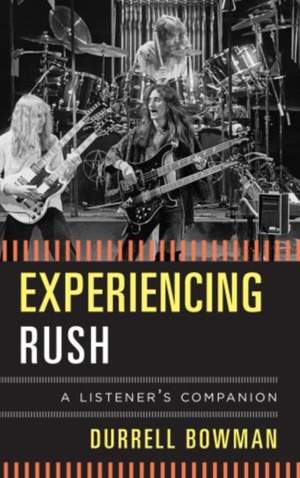 From Rush's self-titles debut album in 1974 to 2012's Clockwork Angels, this work covers the recording career, music, and, less extensively, the personal lives of the progressive rock band. After... — Publishers Weekly More…

Few bands have proven as long-standing and experimental as the Canadian rock act Rush, which has successfully survived and adapted like few others by continuing to work in an album-oriented "progressive hard rock" style. Rush bridged its original blues-rock style with progressive rock and heavy metal in the 1970s, explored new wave and synth rock in the 1980s, and then created a new kind of alternative hard rock in the 1990s and 2000s. Throughout its career Rush has stubbornly remained musically and lyrically individualistic. The band created dozens of albums over its four decades-with 45 million sold-and embarked on major concert tours for millions of fans across the globe.The band's music appeals not just to mainstream rock fans but to those musicians who admire the structural complexity of its music. In Experiencing Rush: A Listener's Companion, music scholar Durrell Bowman guides readers through Rush's long career, explaining through the artful combination of biography, history, and musical exegesis how to listen to this unique act. From Rush's emergence as an early blues-rock power trio of guitar, bass, and drums into the godfathers of progressive hard rock, Bowman marks the band's first breakthrough with its landmark, sci-fi/individualist album 2112. From there, readers explore Rush's movement from "prog rock" extended compositions into shorter, potential-radio-play "post-prog" songs, leading to Rush's most successful album Moving Pictures in 1981. In its later career, Rush adventurously mixed progressive hard rock and music technology, generating a new power trio sound that featured further stylistic evolutions. As Bowman makes clear, it is the band's stalwart path and many influences on fans, musicians, and others that resulted in Rush's induction into the Rock & Roll Hall of Fame in 2013. Rush is a legendary group, and Experiencing Rush is specially written for music fans seeking a deeper look into the band's work, as well as for new listeners ready to discover the unique and diverse sound of one of rock's greatest acts.

From Rush's self-titles debut album in 1974 to 2012's Clockwork Angels, this work covers the recording career, music, and, less extensively, the personal lives of the progressive rock band. After a time line outlining key points in the band's existence, Bowman's introduction notes that Rush deserves such extensive focus because of the musicianship, professionalism, and willingness to experiment that have garnered the band a cultlike fan base from its native Canada and the U.S. to many other countries. While there is some biography in this band history, for the most part Bowman focuses on the band's music as he analyzes each album, including lyrics, time signatures, key and chord choices, themes, and cover art. . . .[T]rue Rush fans will revel in the author's complex descriptions; for instance, he notes from 1980's Permanent Waves to Roll the Bones in 1991, the band's lyrics evolved 'from vaguely Randian atheistic individualism to vaguely left-wing agnostic liberalism.' It's fitting that Bowman finishes with how Rush, after years of being ignored, was inducted into the Rock and Roll Hall of Fame thanks to its fans