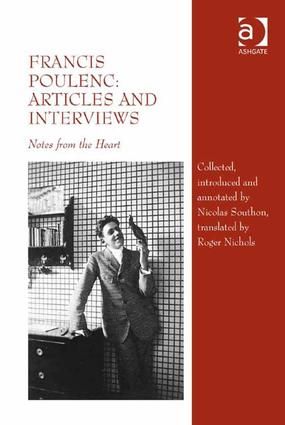 Francis Poulenc: Articles and Interviews: Notes from the Heart

'He plays the piano well,' wrote the society hostess Mme de Saint-Marceaux in her diary on 18 March 1927. 'His compositions are not devoid of talent but he's not a genius, and I'm afraid he thinks he is.' Intelligent though the lady was, she got this one spectacularly wrong. Poulenc has in fact outpaced his colleagues in Les Six by many a mile, as singers and instrumentalists all over the world will attest, and while he would never have accepted the title of 'genius', preferring 'artisan', a genius is increasingly what he appears to have been. Part of the answer lay in always being his own man, and this independence of spirit shows through in his writings and interviews just as brightly as in his music, whether it's boasting that he'd be happy never to hear The Mastersingers ever again, pointing out that what critics condemn as the 'formlessness' of French music is one of its delights, voicing his outrage at attempts to 'finish' the Unfinished Symphony, writing 'in praise of banality' - or remembering the affair of Debussy's hat. And in every case, his intelligence, humour and generosity of spirit help explain why he was so widely and deeply loved. This volume comprises selected articles from Francis Poulenc: J'ecris ce qui me chante (Fayard, 2011) edited by Nicholas Southon. Many of these articles and interviews have not been available in English before and Roger Nichols's translation, capturing the very essence of Poulenc's lively writing style, makes more widely accessible this significant contribution to Poulenc scholarship.