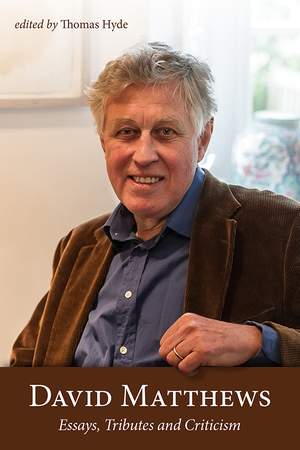 2013 saw the seventieth birthday of David Matthews, the British composer who has established an international reputation as a leading symphonist of our time. This collection, the first on his work, marks the occasion with lively contributions from a host of distinguished musicians and writers. Matthews has supplemented his freelance career by writing extensively and personally on music, and the first part of the book includes all his important essays and reviews to date. These survey the present scene, discuss symphonists (notably Mahler and Sibelius) and focus on individual composers (notably Britten and Tippett). By including extracts from his journal and letters, ThomasHyde's substantial editorial notes sketch out an accompanying biography. This is supplemented in the second part by extended memoirs from Roger Scruton and Peter Sculthorpe, and a collection of tributes in words and music by JamesFrancis Brown, the Smirnov family, Maggie Hemingway, Robin Holloway, Robin Leanse, Colin Matthews, John McCabe, Sir Paul McCartney, Pavel Zemek Novák and Judith Weir. The third part offers a critical forum on Matthews's music. Here, an overview by Malcolm Macdonald leads to essays on symphonies, concertos, quartets and other works by Arnold Whittall, Edward Venn, Geraint Lewis, Hugh Wood and the editor. Frank Ward adds a witty, bibulous epilogue.  David Matthews studied composition privately with Anthony Milner, assisted Benjamin Britten and collaborated with Deryck Cooke on the performing version of Mahler's Tenth Symphony. His large musical output includes contributions to most of the instrumental and vocal genres; he has also published monographs on Tippett (1980) and Britten (2003). For 13 years he was artistic director of the Deal Festival.   Thomas Hyde has lectured at theCity University (London) and Worcester College, Oxford. His compositions include a one-man opera That Man Stephen Ward (2007), a string quartet (2010) and a violin sonata (2012).