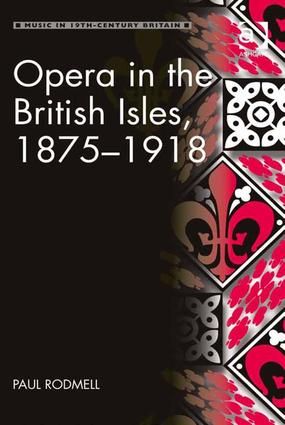 Very readable, meticulously researched... will serve as a good reference for years to come — MusicWeb International

While the musical culture of the British Isles in the 'long nineteenth century' has been reclaimed from obscurity by musicologists in the last thirty years, appraisal of operatic culture in the latter part of this period has remained largely elusive. Paul Rodmell argues that there were far more opportunities for composers, performers and audiences than one might expect, an assertion demonstrated by the fact that over one hundred serious operas by British composers were premiered between 1875 and 1918. Rodmell examines the nature of operatic culture in the British Isles during this period, looking at the way in which opera was produced and 'consumed' by companies and audiences, the repertory performed, social attitudes to opera, the dominance of London's West End and the activities of touring companies in the provinces, and the position of British composers within this realm of activity. In doing so, he uncovers the undoubted challenges faced by opera in Britain in this period, and delves further into why it was especially difficult to make a breakthrough in this particular genre when other fields of compositional endeavour were enjoying a period of sustained growth. Whilst contemporaneous composers and commentators and later advocates of British music may have felt that the country's operatic life did not measure up to their aspirations or ambitions, there was still a great deal of activity and, even if this was not necessarily that which was always desired, it had a significant and lasting impact on musical culture in Britain.

Very readable, meticulously researched... will serve as a good reference for years to come