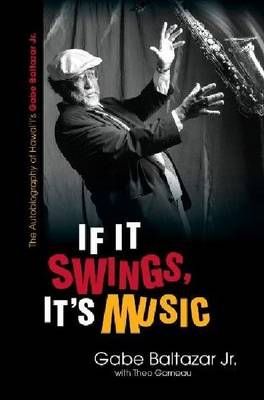 If It Swings, It's Music: The Autobiography of Hawai'i's Gabe Baltazar Jr.

Hawai'i's legendary jazz musician Gabe Baltazar Jr. has thrilled audiences since the late 1940s with his powerful and passionate playing. In this, the first book on his life and career, Gabe takes readers through the highs, lows, and in-betweens on the long road to becoming one of the very few Asian Americans who has achieved worldwide acclaim as a jazz artist.

At a young age Gabe was encouraged by his father, an accomplished musician, to take up the clarinet and saxophone. As a teenager during World War II, Gabe performed with the Royal Hawaiian Band but spent his weekends playing in swing bands. After establishing himself in the West Coast jazz scene, in 1960 he rose to prominence as lead alto saxophonist of the Stan Kenton Orchestra. Following a four-year stint with Kenton, Gabe worked as a valued studio musician, recording with Dizzy Gillespie, Oliver Nelson, and James Moody, among others. In 1969 he returned to Honolulu and went on to become Hawai?i's premier jazz artist, a role he admirably fulfilled for over forty years. At 82, Gabe remains active in jazz education and still performs regularly.

Gabe's memorable encounters with some of the greatest names in jazz and popular entertainment will delight music fans, while readers of Hawai'i and Asian-American life-writing will find in this work a fond record of days past told with humour and heart.