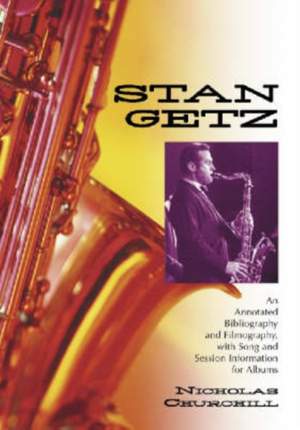 Stan Getz: An Annotated Bibliography and Filmography, with Song and Session Information for Albums

The late jazz tenor saxophonist, Stan Getz, was born in 1927. Getz was influenced by the big bands during World War II and later was a major influence himself until his death in 1991. Some of the musical territory that is covered includes his time with Woody Herman; the Roost sessions; playing with such musicians as Bob Brookmeyer, Gerry Mulligan, Chet Baker, to name just a few. This bibliography includes references to periodical literature, articles from news wire services, books, dissertations, films, videos, television programs, radio broadcasts, and Web sites. The citations are primarily from English-language sources, although citations from many other languages are included. Materials in English and French as well as a handful of items from other languages are annotated. This work also includes a preface that outlines the scope of the work and a user's guide to assist the reader or researcher. Sections on album reviews, performance reviews, discographies and discographical information, transcriptions, biographical and critical works, a filmography and an appendix of materials in Danish, Dutch, German, Italian, Norwegian, Spanish and Swedish complete the volume.

a monumental work...lovingly detailed...colossally impressive...timeless value...unique in Getz literature...thorough, flawless and easy to follow...outstanding...handsomely presented, very easy on the eye and sturdy enough to survive frequent poring and consultation...mandatory reading. Work of this quality is worth every penny