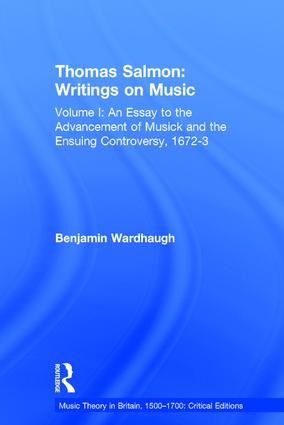 Thomas Salmon: Writings on Music: Volume I: An Essay to the Advancement of Musick and the Ensuing Controversy, 1672-3

Thomas Salmon (1647-1706) is remembered today for the fury with which Matthew Locke greeted his first foray into musical writing, the Essay to the Advancement of Musick (1672), and the near-farcical level to which the subsequent pamphlet dispute quickly descended. Salmon proposed a radical reform of musical notation, involving a new set of clefs which he claimed, and Locke denied, would make learning and performing music much easier. The incident has tended to be passed over rather briefly in the scholarly literature, but beneath the unedifying invective employed by Salmon, Locke and their supporters, serious and novel statements were being made about what constituted musical knowledge and what was the proper way to acquire it. This volume is the first published scholarly edition of Salmon's writings on notation, previously available only in microfilm and online facsimiles. A second volume to follow will present Salmon's writings on pitch - previously only available mostly in manuscript.