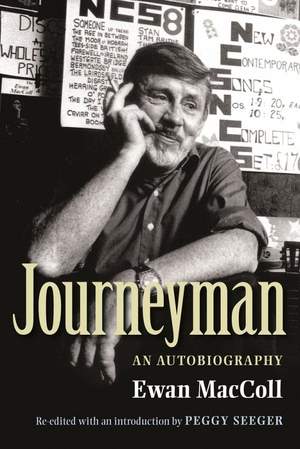 This new edition of Journeyman, Ewan MacColl's vivid and entertaining autobiography, has been re-edited from the original manuscript, and includes a new introduction by Peggy Seeger, for whom he wrote the unforgettable 'The First Time Ever I Saw Your Face'.

MacColl, a singer, songwriter, actor, playwright and broadcaster, begins this fascinating account with his working class Salford childhood, traces the founding and life of Theatre Workshop, one of Britain's most innovative theatre companies, then moves on to his work with folksingers, the Radio Ballads and his ascent into old age.

Ewan MacColl and Peggy Seeger were among the main leaders of the UK folksong revival. Journeyman documents their struggle to secure the integrity of that revival as the popular media appropriated and re-created traditional music for commercial gain.

An entertaining and thought-provoking slice of British history, it will appeal to those interested in the histories of folk music, theatre, radio, left-wing politics and the Manchester area.