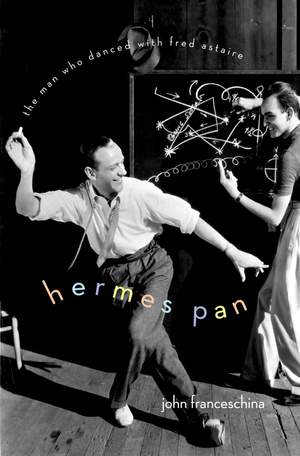 Hermes Pan: The Man Who Danced with Fred Astaire

Hermes Pan: The Man who Danced with Fred Astaire is a rags-to-riches story about a boy from Tennessee who, armed with only an 8th grade education, an inexhaustible imagination, and an innate talent for dancing, becomes the most prolific and popular choreographer of the glory days of the Hollywood musical. As luck would have it, Pan's movie career began and ended working with Fred Astaire, the most famous dancer on film. The pair made nearly two dozen movies and television shows together and in Astaire, Pan found an artistic soul mate with whom he would develop a symbiotic relationship for the rest of his life. A devout Roman Catholic, Hermes was interested in perfecting the souls as well as the physical technique of his dancers and the book explores the profound effect he had on the lives of stars such as June Haver, Ann Miller, Rita Hayworth, Linda Darnell, Ginger Rogers, and Betty Grable. The book examines each of Pan's eighty-nine films offering a panoramic view of Pan's choreography from "Flying Down to Rio" in 1933 to "Aiutami a sognare" (Help Me Dream) in 1980 and comments on the development of Pan's art throughout his fifty-year career. Although Pan lived what many considered a life without scandal or controversy, as a Catholic and homosexual gentleman living as one of the "A-List" of Hollywood's elite, Pan had many personal conflicts and doubts. The book explores these in full along with his unease with the film community, his spiritual vocation as well as his artistic philosophies. The self-made choreographer of films such as "Top Hat", "Swing Time", "Moon Over Miami", "Kiss Me Kate", "Can-Can", "My Fair Lady", "Porgy and Bess", and "Cleopatra", Hermes Pan is proof that the American Dream is still alive.