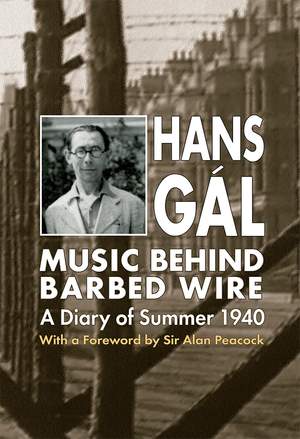 Music behind Barbed Wire: A Diary of Summer 1940

This remarkable book presents a fine translation of the diary kept by Austrian composer Hans Gal during his internment in the summer of 1940, after he had fled Nazi-occupied Europe with his family.... — Classical Music More…

The Austrian composer Hans Gál (1890-1987) was one of many Jewish refugees who fled to Britain from Hitler's Third Reich only to find themselves interned in prison camps in Britain as 'enemy aliens' - the result of Churchill's panic decision to 'collar the lot'. Gál thus spent five months over the summer of 1940 in internment camps - first in Donaldson's Hospital in Edinburgh, then at Huyton, near Liverpool, and finally in the Central Promenade Camp on theIsle of Man. Many of Gál's fellow internees went on, like Gál himself, to become shaping forces in the intellectual life of Britain - but in captivity this colourful parade of characters had to put up with bureaucratic inertia and the indifference of their captors to their undeserved fate. The diary Gál kept during his captivity vividly describes the difficulties the internees had to overcome to live as normal a life as possible. Gál's contribution, of course, was music, and the CD with this book presents first recordings of the Huyton Suite he wrote for two violins and flute (the only instruments available to him), the satirical review What a Life! composed on the Isle of Man and the piano suite he drew from it. Introductory chapters by Gál's daughter and by Richard Dove present a biographical survey of Gál's life and career and an examination of British internment policy; the Foreword is bythe distinguished economist Sir Alan Peacock, who studied composition with Gál. Together they throw light on one of the more shameful British responses to the threat of Nazi invasion.

This remarkable book presents a fine translation of the diary kept by Austrian composer Hans Gal during his internment in the summer of 1940, after he had fled Nazi-occupied Europe with his family. . . . His diary is typically insightful, witty and richly detailed, written in a vivid and engaging style that translates well and grips the reader. [. . . ] one of the joys of this book is a free accompanying CD which presents fine recording of the works he created. . . . This is music of such optimism and invention, that it is scarcely credible it was created under such duress. It deserves wider currency. [. . . ] Unreservedly recommended