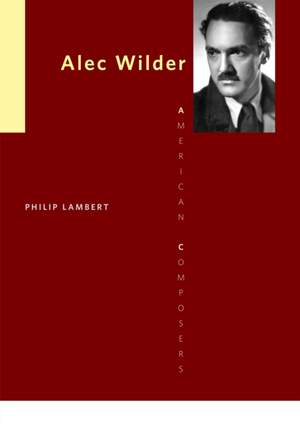 The music of Alec Wilder (1907-1980) blends several American musical traditions, such as jazz and the American popular song, with classical European forms and techniques. Stylish and accessible, Wilder's musical oeuvre ranged from sonatas, suites, concertos, operas, ballets, and art songs to woodwind quintets, brass quintets, jazz suites, and hundreds of popular songs. In this biography and critical investigation of Wilder's music, Philip Lambert chronicles Wilder's early work as a part-time student at the Eastman School of Music, his ascent through the ranks of the commercial recording industry in New York City in the 1930s and 1940s, his turn toward concert music from the 1950s onward, and his devotion late in his life to the study of American popular songs of the first half of the twentieth century. The book discusses some of his best-known music, such as the revolutionary octets and songs such as "I'll Be Around," "While We're Young," and "Blackberry Winter," and explains the unique blend of cultivated and vernacular traditions in his singular musical language.