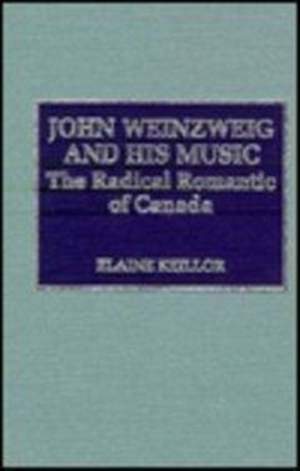 John Weinzweig and His Music: The Radical Romantic of Canada

John J. Weinzweig (b. 1913) has been considered the dean of Canadian music for over thirty years. This is the first book-length study of his development as a musician and his contributions to Canadian music as a composer, teacher, and administrator. Keillor discusses his training and development in the context of Toronto's musical life during the 1930s and 40s, in particular, thus providing a useful and valuable historical perspective. During these years, Weinzweig established the profession of composer in Canada. Subsequently, his compositions, which are extensively examined in Part II, provided models of current compositional practice for his many students, as well as valuable additions to contemporary music literature. He was the first Canadian to propound the use of the serial technique, and Keillor traces his particular adaptations of serialism from 1939 to 1970. In his later compositions, he has elaborated on issues such as the role of silence, and theatrical and structural aspects initially explored by the Dadaists and Satie. In his life as well as his music, Weinzweig has championed advanced and often unpopular ideas. The romantic side of him is his imaginative and visionary quest to better the lot of his fellow composers, particularly in Canada. The book provides a fully annotated listing of Weinzweig's compositions, plus information about recordings. An appendix lists the approximately hundred scores for radio dramas and films that Weinzweig prepared for the Canadian Broadcasting Corporation and the National Film Board of Canada. Illustrated; filmography; bibliography.