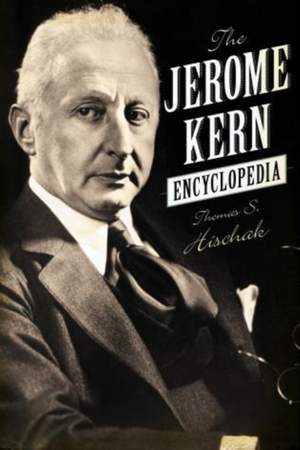 Hischak credits Kern in the preface with creating "the sound of the American musical," which is the case he attempts to make with this sorely overdue reference work. In prose that is not overly... — Choice More…

Jerome Kern (1885-1945) is considered one of the most versatile and influential of all American theatre and film composers. His pioneer work in developing a truly American musical sound inspired many of the great songwriters of the 1920s, 1930s, and 1940s, and his songs include dozens of beloved standards still heard today, such as "Smoke Gets in Your Eyes" and "The Way You Look Tonight." The Jerome Kern Encyclopedia consists of entries on people, theatre and film musicals, songs, subjects, and themes related to the composer. Not only are all of Kern's stage and screen projects from 1904 to 1946 covered, but there are also entries on all the major librettists and lyricists with whom he worked, as well as producers, directors, actors, and other individuals who figured prominently in his career. Approximately 100 of Kern's most important songs are discussed, and other entries address awards, collaborations, working methods, song styles, and other related subjects. The encyclopedia also includes a brief biography of Kern, a chronology of his life and work, and appendices on recordings, interpolations, revivals, and remakes. The most complete work on one of America's greatest composers, this fascinating, readable, and extensive look at Kern will appeal to theatregoers, movie musical fans, students, teachers, and professionals in musical theatre.

Hischak credits Kern in the preface with creating "the sound of the American musical," which is the case he attempts to make with this sorely overdue reference work. In prose that is not overly academic, articles cover Kern's musicals, songs, and collaborators, including performers with meaningful connections to the composer. Musicals are consistently presented with information on style, author, lyricist, location and date of debut performance, run, alternate productions and revivals, and key performers; following is a summary of the plot and history of the production, highlighting songs important to the plot or to Kern's career. Overall, the entries about songs are nontechnical, but occasionally dabble in soft music theory. The author instead addresses the song's history: use in a production, notable performances, and appearances in other musicals or innominate interpolations. Hischak introduces performers and collaborators by their connection to Kern, and then expands on their careers with further contextual information. Photographs appear throughout, with excellent captioning providing additional information unavailable in the accompanying article. The highly useful appendixes cover the chronology of Kern's awards, musicals, interpolations, and discography. Extensive bibliography and thorough indexing. Summing Up: Highly recommended. Lower-division undergraduates and above

This volume offers practically one-stop shopping for music students and Jerome Kern enthusiasts. The main body of the work includes entries for songs, stage works, films, and musical styles. Hischak, a veteran musical-theater author, has added biographical sketches for many of Kern's collaborators-including directors, performers, lyricists, and producers-taking care to put them in context with their work with Kern. A discography, a chronology, and an awards list are added value for this useful text