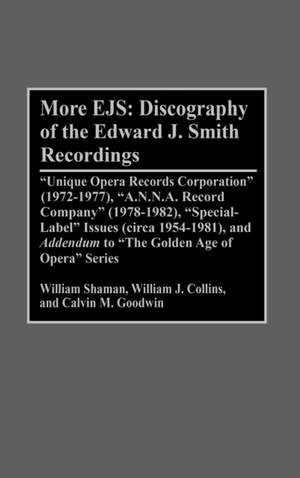 In January of 1972 the Golden Age of Opera series of the Edward J. Smith Recordings was succeeded by the Unique Opera Records Corporation (UORC) and released two-hundred and eighty numbered releases between 1972 and December, 1977. Smith's final private label, the A.N.N.A. Record Company (ANNA) released seventy-three numbered issues between 1978 and 1982. Interspersed between UORC and ANNA, and spanning the years 1954 to 1981, numerous special label issues were released under fugitive names. As a companion to the first volume, EJS: Discography of the Edward J. Smith Recordings The Golden Age of Opera, 1956-1971, this volume continues where the first left off.

The three labels are catalogued in separate sections. Researchers will appreciate the ten indexes provided and the selectively quoted material from Smith's personal correspondence that supplements the text.