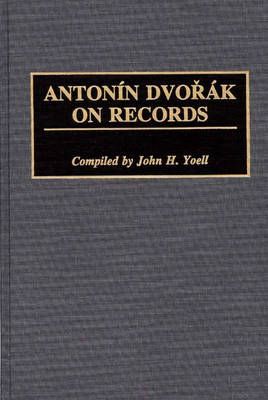 Compiled in cooperation with the Antonin Dvorak Society of Prague, Czechoslovakia, to commemorate the 150th anniversary of the composer's birth, this is the first book-length discography on Dvorak. It updates the discography appended to Jarmil Burghauser's Antonin Dvorak Thematic Catalogue (1960). Burghauser, President of the Dvorak Society, explains in a foreword to the present work that, due to the immense proliferation of Dvorak recordings, it was decided not to include a discography in the revised edition of the Thematic Catalogue. Organized similarly to the Catalogue by genres and works, Antonin Dvorak on Records may be used in conjunction with it and, further, will be valuable to musicians, students, collectors, and others primarily interested in the recordings.

The discography selects from the many thousands of Dvorak recordings those of excellence and historic significance on LP and CD formats, representing the diversity of the oeuvre. The volume introduction surveys the recording history before the LP revolution. Indexes provide access to the recordings by works and by performers and performing groups.