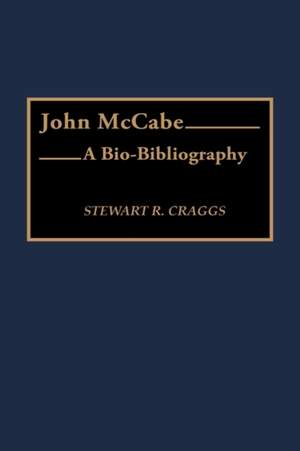 John McCabe is a thoroughly documented bio-bibliography of one of Britain's leading composers. John McCabe has an international reputation, both as a composer and a pianist, whose compositions cover most of the established forms. The complete list of his works and performances have never before been presented in such detail. Articles and features by and about the composer contain annotations, often in the form of quotations from the material. National, academic, and public libraries, as well as specialized music libraries and archives, will find this work a valuable research tool.

The work begins with a brief biography of John McCabe prepared with the composer's assistance and is followed by a complete list of works and performances classified by genre and arranged alphabetically by title of composition. Performance and publication information is provided for each work, including its first and other selected performances. A list of McCabe's publishers is followed by a discography of commercially produced sound recordings divided into sections on McCabe as a composer and as a performer. A bibliography of writings by and about McCabe includes gramaphone record reviews written by McCabe for the British journal Records and Recordings between 1967 and 1974. An alphabetical and a chronological list of compositions appear in appendices.