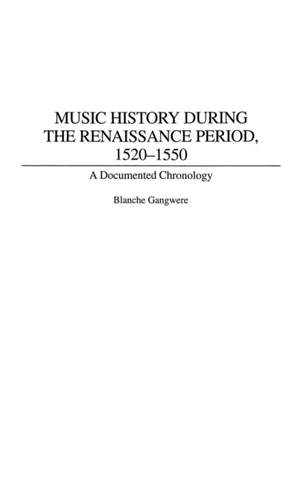 Music History During the Renaissance Period, 1520-1550: A Documented Chronology

This annotated chronology of western music is the third in a series of outlines on the history of music in western civilization. It contains a 120-page annotated bibliography, followed by a detailed, documented outline that is divided into ten chapters. Each chapter is written in chronological order with every line being documented by means of abbreviations that refer to the annotated bibliography. There are short biographies of the theorists and detailed discussions of their works. The information on music is organized by classes of music rather than by composer. Also included are lists of manuscripts with descriptions of their contents and notations as to where they may be found. The material for the outline has been taken from primary and secondary sources along with articles from periodicals.

Like the other two volumes in this series, Music History from the Late Roman through the Gothic Periods, 313-1425 and Music History During the Renaissance Period, 1425-1520, this volume will be an important research tool for anyone interested in music history.