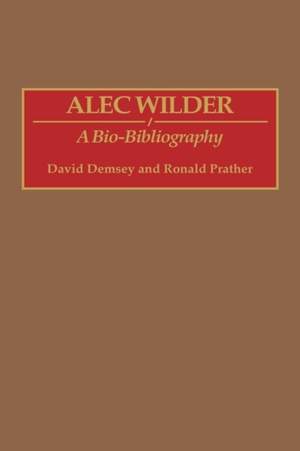 One of the few American composers to earn an international reputation in both classical and popular music, Alec Wilder (1907-1980) was a true innovator in every phase of composition he chose to pursue. In addition, his life and associations in the world of music, theatre, literature, and the arts make for fascinating reading, and his own writings in these areas are witty and insightful. His many hundreds of musical compositions, ranging from chamber and orchestral music, to opera and ballet, theatre and film, and art songs and popular songs, are documented and annotated here in an exhaustive catalog of works. Included are detailed performance information and cross references to recordings in a discography section and reviews and commentary in a fully annotated bibliography of writings by and about the composer. The book also includes a lively biographical sketch capturing the sense and style of the composer and his times, a summary of archival materials held at the Eastman School of Music, an appendix of awards, a directory of music publishers, a chronological list of compositions, and an index.

It is hoped that this thorough compendium to aid in the growing scholarly and musical interest in Wilder will serve to expose his work to wider audiences, while also helping to ferret out missing or unknown manuscripts given away to friends and performers by the composer.