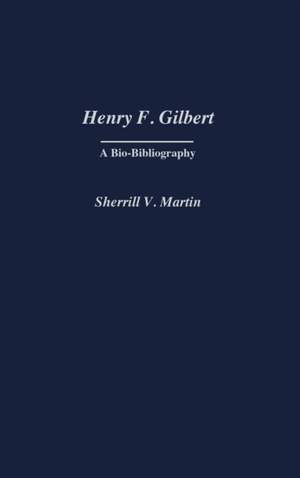 Among the first composers to refute German dominance of American music and propose a new path for a national idiom, Gilbert was a creative talent who saw indigenous music as a source for serious... — Choice More…

During his lifetime, Henry F. Gilbert was regarded as one of the foremost composers of the day and a trailblazer in America's rich musical heritage. Often called the Mark Twain of American Music, Gilbert was one of American music's nonconformists. He was a maverick who became a true prophet of American music as a composer, writer, editor, and lecturer. This volume contains a short biography of Gilbert, a listing of his compositions, including the different versions of the works and the holding libraries. A discography is included, which puts emphasis on the inclusion of excerpts from contemporary performances. This book captures much of the new material on Gilbert that has surfaced since the Henry F. Gilbert Papers were presented to Yale.

The volume is divided into six sections. The first is the biography, which includes a sketch of Gilbert's life, and his importance in establishing an American school of composition. The Works and Performances section provides the name of the work, publisher, and date and revisions of the work. Scoring for the compositions is also given along with cross-references to Gilbert's program notes and reviews. An annotated Bibliography of writings by Gilbert summarizes his philosophy of American music, and illuminates his own compositional style. A discography, general bibliography, and a bibliography of works and performances are also concluded. This bio-bibliography will appeal to musicians and American enthusiasts alike.

Among the first composers to refute German dominance of American music and propose a new path for a national idiom, Gilbert was a creative talent who saw indigenous music as a source for serious composition. Martin's biobibliography provides a guide to material about Gilbert, including the important collection of his papers at Yale....Recommended. Upper-division undergraduates and higher