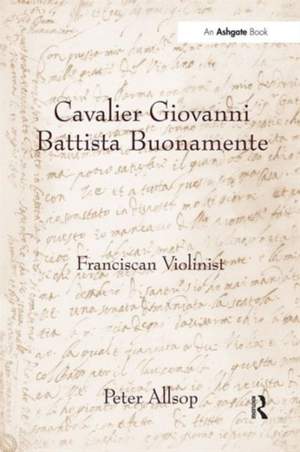 With the analysis of the music, Allsop moves into an area where he is a recognized master. Quite simply, he probably knows, and has at his fingertips, more of the Italian - and not only the... — Music and Letters More…

Giovanni Battista Buonamente was among the most original and inventive Italian composers of the seventeenth century. Peter Allsop reveals his importance as part of a tradition that stands in direct antithesis to that of the Corellian sonata today regarded as the 'norm'. This development is traced in a series of likely teacher-pupil relationships from Salamone Rossi to Marco Uccellini, the most prolific Italian composers of instrumental ensemble music in the first half of the seventeenth century. The first half of the book sets out what is known of Buonamente's turbulent career as he moved from the courtly environments of the Gonzaga household and Habsburg court to several less auspicious posts at various religious institutions, ending his life as maestro di cappella at the mother house of his order, S. Francesco in Assisi. A fascinating picture emerges of the nature of musical patronage against a background of war and plague in this time of great political instability. The later chapters comprise detailed discussions, supported with over 100 music examples, of the unusually wide range of genres for which Buonamente wrote: sinfonias, free sonatas, sets of variations, canzonas, dances; and he was the first Italian to cultivate the ensemble suite to any extent. The book concludes with an examination of his influence on his probable pupil Marco Uccellini and the interest Buonamente instigated in canonic writing, which was passed via Uccellini to a succession of Modenese composers.

With the analysis of the music, Allsop moves into an area where he is a recognized master. Quite simply, he probably knows, and has at his fingertips, more of the Italian - and not only the Italian - instrumental repertory of the Seicento than any other scholar working in the area