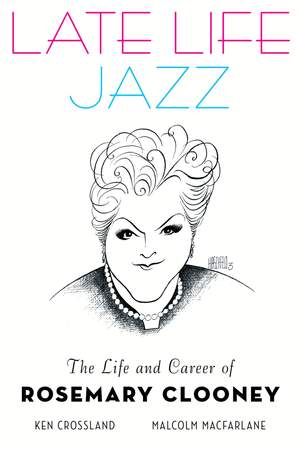 Late Life Jazz: The Life and Career of Rosemary Clooney

Heralded by Tony Bennett as "the Madonna of the 1950s," Rosemary Clooney first came to national prominence when, guided by record producer Mitch Miller, she topped the Hit Parade with songs such as "Come On-a My House" and "Half As Much". Today, the name "Clooney" is synonymous with superstardom, with George Clooney, her nephew, fittingly regarded as one of Hollywood's most notable aristocrats. Few realize, however, that it was originally Rosemary's hit records that brought the surname to achieve worldwide fame and which ultimately landed her a starring role in the immortal "White Christmas", alongside Bing Crosby, Danny Kaye and Vera Ellen. By the time the Sixties arrived however, personal turmoil, fueled by an addiction to prescription medication, almost destroyed her life and her career. Rosemary endured a long period of mental therapy before she was able to resume her singing career in the early 1970s. Few expected her to be anything more than a nostalgia baroness. Rosemary had other ideas. Stimulated by a series of concerts alongside her friend and mentor, Bing Crosby, Rosemary found a new medium in the midst of America's finest jazz musicians, building a second career and with it, a reputation one of - some would say, the - finest interpreter of the Great American Songbook. Late Life Jazz is the story of the rise, fall and rise again of Clooney the First, Aunt Rose, a singer par excellence.