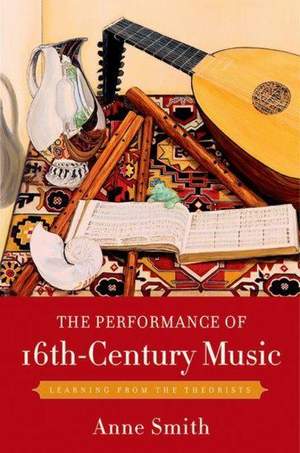 The Performance of 16th-Century Music: Learning from the Theorists

Modern musical training tends to focus primarily on performance practices of the Classical and Romantic periods, and most performers come to the music of the Renaissance with well-honed but anachronistic ideas and concepts. As a result, elemental differences between 16th-century repertoire and that of later epochs tend to be overlooked-yet it is just these differences which can make a performance truly stunning. The Performance of 16th-Century Music offers a remedy for the performer, presenting the information and guidance that will enable them to better understand the music and advance their technical and expressive abilities. Drawing from nearly 40 years of performing, teaching, and studying this repertoire and its theoretical sources, renowned early music specialist Anne Smith outlines several major areas of technical knowledge and skill needed to perform the music of this period. She takes the reader through part-books and choirbooks; solmization; rhythmic inequality; and elements of structure in relation to rhetoric of the time; while familiarizing them with contemporary criteria and standards of excellence for performance. Through The Performance of 16th-Century Music, today's musicians will gain fundamental insight into how 16th-century polyphony functions, and the tools necessary to perform this repertoire to its fullest and glorious potential.