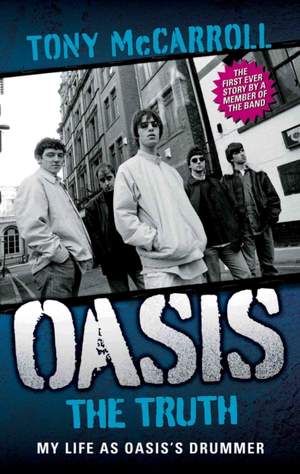 Oasis the Truth: My Life as Oasis's Drummer

Good luck trying not to root for them — Rolling Stone

In 1991, five wannabe Mancunian musicians came together and cracked a spark that was to ignite the explosion which became Oasis. The band went from obscurity to become a global phenomenon in the space of a year, achieving world-wide recognition and selling over 70 million records. Pre Oasis, drummer Tony McCarroll joined a band called The Rain, linking up with guitarist Paul 'Bonehead' Arthurs, bassist Paul McGuigan and singer Chris Hutton. Hutton was later replaced by Liam Gallagher who in turn brought brother Noel along. What started out as five young lads with a common dream of becoming rock stars eventually disintegrated into in-fighting, clashes of egos and finanical disputes. In 1995, following the release of Definitely Maybe - the fastest-selling debut of all time - things came to a head and Tony left the band. In this candid and hilarious book, Tony tells one of the most in-depth rock 'n' roll stories of modern times. He reveals the truth about the early years before the band was even formed; he tells of the drinking and drug consumption. Plus, he talks of his much-publicised rift with Noel Gallagher. Tony's recollections include stories involving David Beckham, Prince, Eric Cantona and John McEnroe.

Good luck trying not to root for them