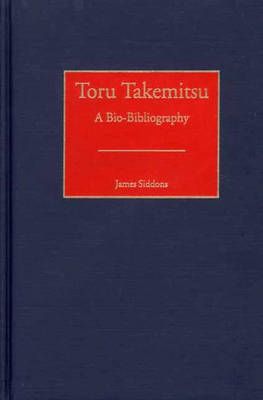 The Takemitsu bio-bibliography of James Siddons is a marvelously thorough and wonderfully organized work. In addition to its cogent and elegantly written biography, his imaginative and highly... — Notes: Journal of the Music Library Association More…

Though often misunderstood in the West, the works of Toru Takemitsu (1930-1996) deserve attention beyond their native land. Although he wrote most of his music for Western instruments in international contemporary concert style, to be played by performers trained in the European musical tradition, lists and scores of his music have been difficult to obtain. Designed for use by musicians, scholars, and program directors who need compact, understandable information on Takemitsu, but who are unfamiliar with Japanese language and music, this bio-bibliography--including sections on his works, performances, films scores, recordings, and writings--will be invaluable to musicians, scholars, journalists, and music directors alike.

The annotations of the entries are especially useful in determining answers to such questions as what instruments are needed to perform a piece, what should be said about a film or composition in a program note, what analysis or interpretation of a work is appropriate or has been done before, and what Takemitsu himself has said or written about each work. Siddon's fully cross-referenced volume offers information on approximately 150 compositions, 100 film scores, 250 audio recordings, and 500 bibliographical items, while the biography places the composer's life in the milieu of post-Pacific War Japan and contemporary music in Japan, Europe, and the United States.

The Takemitsu bio-bibliography of James Siddons is a marvelously thorough and wonderfully organized work. In addition to its cogent and elegantly written biography, his imaginative and highly useful general categorizations of works according to genre, instrumentation, and theme complement beautifully the detailed performance, critical, and programmatic information given for almost every concert work. Particularly impressive are the ways in which Siddons clarifies relationships between works (self-borrowing, for example) and provides, where they exist, Japanese titles in Japanese characters. In addition to the book's comprehensive discography and multilingual bibliography, the section on Takemitsu's music for film and television provides a wonderful springboard for future Takemitsu research. This book is a must for any music library; all students of either twentieth-century Japan or Japanese music are deeply indebted to the author