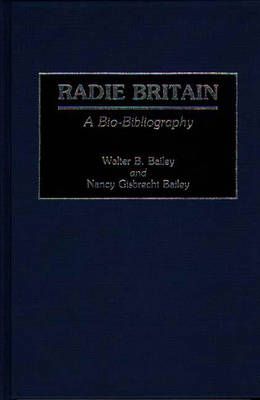 Radie Britain is a California composer from West Texas who was educated in Chicago and Europe. At 91 years old, she is still an active composer, her 280 works include orchestral, piano, organ,... — Choice More…

Radie Britain: A Bio-Bibliography is a concise biography which summarizes the major events in the prolific American composer's life, and describes the conditions under which her singular talent emerged. An in-depth interview with Britain herself gives the opportunity to hear her own personal thoughts on her life, music, and creative philosophy. Walter and Nancy Bailey give an exhaustive list of works and performances, each accompanied by significant information on the work or documented performance. Also included are Britain's compositions for orchestra and band; chamber ensemble; solo piano; piano duets; the harp; chorus and solo voice as well as her stage works. Authorized by Miss Britain and compiled with her help, this is a comprehensive guide to the work of a gifted musician.

A bibliography of Britain's writings concludes the text along with reviews of her performances and other press materials. With its chronological arrangement, this bibliography traces Britain's musical evolution much like a second biography. An index to the entire volume is provided. Both chronological and alphabetical lists of works can be found in the appendixes.

Radie Britain is a California composer from West Texas who was educated in Chicago and Europe. At 91 years old, she is still an active composer, her 280 works include orchestral, piano, organ, and chamber music. This bio-bibliography is the first comprehensive publication on Britain's works. One of the authors is a music professor at Rice University, the other an adult education instructor in Houston. Like the other books in this Greenwood series, the volume includes a short biography of the composer, a list of works (including premiere and other performance dates), an annotated bibliography, appendixes containing chronological and alphabetical listings of works, and an index. Two features distinguish this from other Greenwood bibliographies: the inclusion of an interview with the composer and the use of a clear and attractive typeface. There is no discography because only one of Britain's compositions has been recorded. The volume would be easier to use if instrumentation were included in the running heads of the works list, if original composition entries included cross-references to arranged works, and if instrumentation were consistently indicated in the appendix. This is a useful source on Radie Britain and her compositions