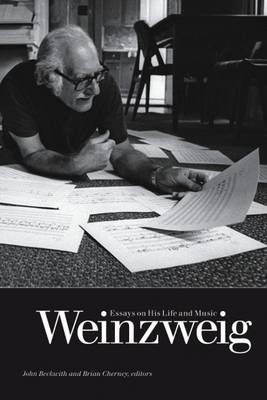 Weinzweig: Essays on His Life and Music

John Weinzweig (1913a2006) was the pre-eminent Canadian composer of his generation. Influenced by European modernists such as Stravinsky, Berg, and Webern, he was the first Canadian composer to employ serialism, thereby bringing a spirit of innovation to mid-twentieth-century Canadian music. A forceful advocate for modern Canadian composition, Weinzweig played a key role in the founding of the Canadian League of Composers and the Canadian Music Centre during a buoyant and expansive period for the arts in Canada. He was an influential force as a teacher of composition, first with the Royal Conservatory of Music and later with the University of Toronto's music faculty. This first comprehensive study of Weinzweig since his death consists of new essays by composers, theorists, and musicologists. It deals with biographical aspects (the social context of early-twentieth-century Toronto, his activism, his teaching, his early scores for CBC Radio dramas), analyzes his compositional processes and his output (his approach to serialism, his instrumental practice, the presence of jazz elements, the vocal works, the divertimenti), and examines various evaluations of his music (his own a in letters, interviews, talks, and writings a plus those of critics and scholars, of listeners, and of performers). The essays are framed by the co-editors' portrait/assessment of Weinzweig and a brief personal memoir. Much of the content draws on new research in the extensive Weinzweig Fonds at Library and Archives Canada in Ottawa. Included at the end of the book are a [http://www.wlupress.wlu.ca/General/beckwith-cherney-list-of-works-discography.pdf List of Works by John Weinzweig by Kathleen McMorrow and a Discography by David Olds ] both available here as pdfs. Supplementing the volume is an audio CD of extracts (some in their first public release), ranging from a 1937 student work to a song cycle of 1994. Read the [http://www.wlupress.wlu.ca/General/beckwith-cherney-cd-notes.pdf Notes and Texts for the CD .]