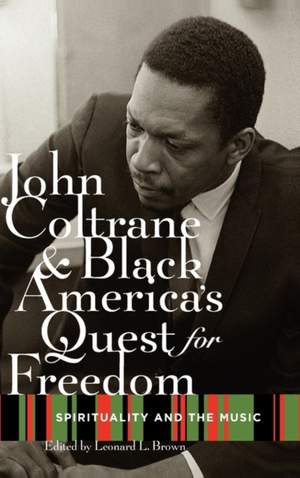 John Coltrane and Black America's Quest for Freedom: Spirituality and the Music

John Coltrane and Black America's Quest for Freedom is a thorough investigation of John Coltrane's music via the artist, and the artist via his culture, not in an effort to solidify notions of... — Black Grooves More…

John Coltrane's unique and powerful saxophonic sound is commonly recognized among jazz scholars and fans alike as having a "spiritual" nature, imbued with the perfomer's soul, which deeply touches musicians and listeners worldwide. This revered and respected musician created new standards, linked tradition with innovation, challenged common assumptions, and relentlessly pursued spiritual goals in his music, which he aimed openly to use as a means to help listeners see the beauty of life. More than four decades after Coltrane's death, it is this spiritual nature of the music that has kept his sound alive - and thriving - on the contemporary jazz scene. Edited by prominent jazz musician and scholar Leonard Brown, John Coltrane and Black America's Quest for Freedom is a timely exploration of Coltrane's sound and its spiritual qualities as they relate to Black American music culture and aspirations for freedom. A wide-ranging collection of essays and interviews featuring many of the most eminent figures in jazz studies and performance-Tommy Lee Lott, Anthony Brown, Herman Gray, Emmett G. Price III, Dwight Andrews, Tammy Kernodle, Salim Washington, Eric Jackson, and TJ Anderson (foreword)-the book examines the full spectrum of Coltrane's legacy. Each essay approaches this theme from a different angle, in both historical and contemporary contexts, focusing on how Coltrane became a quintessential example of the universal and enduring qualities of Black American culture. The contributors address Coltrane as the Black intellectual, the visionary master of musical syntax, the man and the media icon, and ultimately the symbol of the spiritual core of Black American music.

John Coltrane and Black America's Quest for Freedom is a thorough investigation of John Coltrane's music via the artist, and the artist via his culture, not in an effort to solidify notions of black identity or enshrine a cultural legacy, but rather to show that the Black American experience itself is complex, improvised, defiant, and irreducible